The two petitions were filed under Section 482 of the Code of Criminal Procedure for quashing of complaint passed by Ld. ACMM, New Delhi, Patiala House Courts, New Delhi against the common impugned order dated 06.06.2016.

Brief Facts of the Case

On 03.05.2011, Food Inspector and Field Assistant under the supervision of the Local Health Authority (LHA) collected samples of 6 bottles of alleged misbranded product from the premises of M/s Barista Coffee Company Ltd., Connaught Place, New Delhi and which were stored for sale in sealed glass bottles of 473 ml, each. Here, the petitioners were Directors of the Company namely V & V Beverages, importer of “Snapple Juice Drink”, which were imported from the United States, among other vendors and supplied to M/s A & M Enterprises, a distributor company, which in turn distributed the same to M/s Barista Coffee Company Limited, the chain-end vendor. 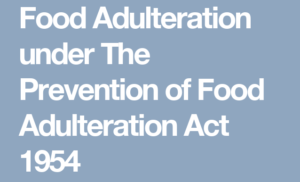 Ms. Geeta Luthra, learned Senior Counsel appearing on behalf of petitioners submitted that the sample of “Snapple juice drink” is not misbranded under Section 32(e), since the barcode/ Julian Code mentioned on the packaging of the sample sufficiently complies with the requirement of batch/ code/ lot number i.e., a combination which can be used to find the batch of the product the sample was a part of. She added that the complainant has failed to furnish a single independent averment or material of the petitioners being in charge and responsible for conducting the day-to-day business of their firms and that the petitioners had moved an application under Section 294 Cr.P.C. r/w Section 19(2) of the PFA Act for being discharged as an accused taking benefit of “warranty”.

On the other hand, the respondent argued that as far as Rule 32(e) is concerned, the petitioners have relied upon the judgment titled as Dwarka Nath vs. MCD: (1971) 2 SCC 314 wherein Hon’ble Supreme Court of India had struck down said provision being beyond the rulemaking power under Section 23(1) of the PFA Act. As per Rule 32(e) [as it existed at that time (the said judgement was passed on 23.04.1971)], “batch number or code number”, had to be mentioned in Hindi or English or numerical or alphabets or in combination, on every label.

“a batch number or code number either in Hindi or English or numerical or alphabets or in combination”.

Thus, an apparent distinction, which can be seen in the language of Rule 32(e) as it existed earlier and as it exists today, is that the purpose of giving batch number/ code number/ lot number is to identify the food article by any identification mark so as to enable it to be traced in the manufacturing and distribution process.

This Court also noted that under PFA Act, not only the seller but distributors/ suppliers and manufacturers are also liable for prosecution. It is important to note that as per Section 14 of the PFA Act, every manufacturer or distributor or dealer has to sell an article of food by giving a warranty in writing in the prescribed form. Therefore, to get warranty under Section 19(2) of the PFA Act, every such vendor or supplier has to establish that he was having a written warranty conforming to Rule 12-A and Form VI-A as prescribed.

In view of the above facts, the judgments relied upon by the petitioners are not relevant. Accordingly, there is no illegality or perversity in the impugned order passed by Ld. ACMM, II, New Delhi, Patiala House Courts. Therefore, due to no merit in the case, the petitions were accordingly dismissed.